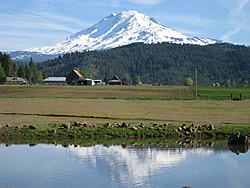 An ADF Monastery and Seminary

It has been a dream of mine for some time now to found an ADF style monastery. Currently, my idea is to use the Pagan theolgical concept of the Three Worlds as my cultural complex, to include the entire Indo-European spectrum, but it's still early days, and I haven't settled on a name yet. I just know that Mt. Adams, which figures prominently in the landscape nearby, will somehow be involved. Order of the White Mountain, anyone?

This concept is only in the early planning stages, and will probably take years to flesh out. What I have here is only the barest of beginnings. However, we sold our property near Tucson in early 2008, and have bought 23 acres near Trout Lake, WA, at the base of Mt. Adams. The idea is to adapt and create an environmentally sustainable set of buildings to house the Order, along with shrines, temples and Nemetons. To this end, we have been investigating building the Hall, and using solar power and organic/ sustainable materials when possible. 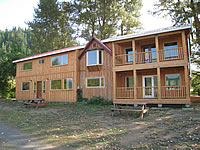 Currently on the property is a 4 bedroom house with an apartment in it, a barn where Kozen's Zendo is, a garage now under construction, and a cob-built sanctuary. We just built two new machine sheds for the tractors.

Kozen and his Buddhists have taken over the barn and may put a temple down where the stalls are now. I and the Druids will take part of the house, making the apartment into the library and office, and I've been building the new Stone Circle and plan other shrines, etc., near to it. The stones are up, and the boundary ditch is being faced with rock. There is a shaft for offerings and I hope to get the firepit built by summer of 2011.

We will also need to build a Hall for potlucks, meetings, gatherings, etc. When we got our change-of-use to a monastery/seminary from the county, they stipulated that we could build a hall up to 4000 square feet in area. 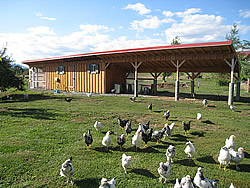 The majority of the property is being farmed, and we have recently been certified as an organic farm by the State of Washington for both eggs and produce (fruit and veggies). We have a small, mature orchard of apples, pears, plums and elderberries that we have expanded by planting 200 more trees (apples, pears, and cherries, mostly). We also have a chicken house (we call it the 'Chicken Palace') with 70 organic chickens in the old orchard (and we'll probably get more). The chicken house has a covered run so that they can still go outside when there's lots of snow on the ground.

The vegetable gardens are also organic and extensive, including 5 new raised beds, so we'll be selling veggies at the local farmers markets, and Kozen and I are investigating raising alpacas for their fleece. The new vegetable gardens (called 'truck gardens') are in the area by the new orchard where we have installed deer fencing to keep out the critters. The property has water rights to irrigation taken off the White Salmon River which is fed from glaciers on Mt. Adams. We also have municipal water, a well, and access to water from a couple of springs on the hill to the east of our land. 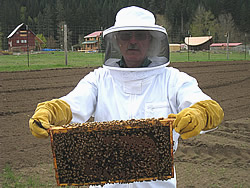 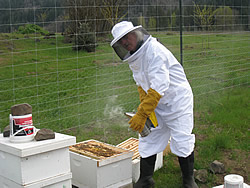 The newest members of the Abbey are two bee hives. Kozen has wanted bees for some time, and now we finally have some. He's been studying and reading up on them and so we've just plunged right in! They will be invaluable for polinating our fruit trees and vegetable crops, and the honey we get will also be quite welcome.

For other income, we are considering buying a small foundry to make amulets and talismans out of bronze to be blessed and magically imbued with specific powers, which could be sold on-line or in a small shop on the property. We may also be available for folks to come and spend quiet time in contemplation and in devotion to the Kindreds. 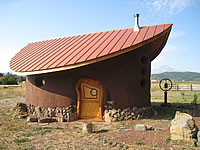 The goals of the Order would include self-transformation through ritual and ecstatic trance practices, celebrating the Three Kindreds on a daily basis, with rites held at various shrines and temples as well as in members' homes, and an all-around emphasis on piety. We would also develop rites for all the High Days and for the various US Civic Holidays. In good weather the new Stone Circle would be used, with the Sanctuary (left) used during inclement weather.

I'd also like to see us become a seminary, providing on-line and in-house classes for folks wishing to become ADF Priests, ADF Initiates, and Monks of the Order.

We would also have to become self-supporting. We will do my best to provide some sort of endowment, but the Order will also have to produce products for sale, teach classes, and work outside for Order income.