Back to my ADF Druidism Main Page 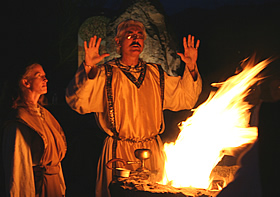 The Liturgists Study Program (LSP) is the program created and administered by the ADF Liturgists Guild to train its members in the art of writing, planning, directing and performance public ritual. The program is broken down into three Circles, or levels with the First Circle emphasizing an understanding of the principles that inform our religion, both of a scholarly and practical nature, as well as a concentration on daily, personal devotionals. The Second Circle concentrates on public ritual, while the Third Circle concentrates on specialized rites, such as Rites of Passage and the conduct of rituals involving multiple traditions. Some of these courses have also been incorporated into the ADF Clergy Training Program at various levels. I was the first person to complete the First Circle of the Liturgists Study Program.

Some courses from the Clergy Training Program/Generalist Study Program may be substituted for their equivalent courses below. Usually, the LSP version of the course is easier or has fewer exit questions to be answered. In these cases, I chose to do the CTP/GSP versions of the courses.

Below are the courses in the program and the ones that I have completed are linked to the work. As of this writing, only the First Circle of the program has been opened for students.

The following courses are abridged versions of those in the CTP/GSP. I did the full GSP/CTP version of these courses.

The following courses were specifically developed for the Liturgists Study Program.

There are also two discretionary courses that are only required should the Guild Preceptor think that there were deficiencies in submitted work. I was not required to do them, but did do them for the CTP/GSP.

Plus any 1 Elective (below)

Plus any 2 Electives not completed for the Second Circle (below)